From the day we bought an original iPad for testing, NYIP Student Advisor Chris Corradino fell in love with it. Frankly, we were starting to worry how we'd get it back, but Apple solved that problem by bringing out the iPad 2. Chris, who lives in Long Island, was so smitten with the iPad that he joined the first-day throng at the Apple Store at Roosevelt Field Mall. Here's his report on the experience, along with a round-up of his favorite iPad apps.

This was the first time I ever participated in a launch day purchase, and it was quite the event. When I arrived at the Apple Store on March 11th, there was no line to be seen. It was about 10:15 in the morning so I wondered if maybe I was first to arrive. Not likely considering the hype and anticipation that had been surrounding the device. I asked an employee who said "the line is forming downstairs and outside in the parking garage." Did she just say "parking garage?" I descended into the depths of the cold, dank lower level of the mall and sure enough, about 25 people were already on line. The cement was stained with oil, and quite frankly it smelled of urine and cigarettes. This was so far from the slick, polished appearance of the way Apple normally does business. We're all here to spend a substantial amount of money — can we get a lousy folding chair out here? 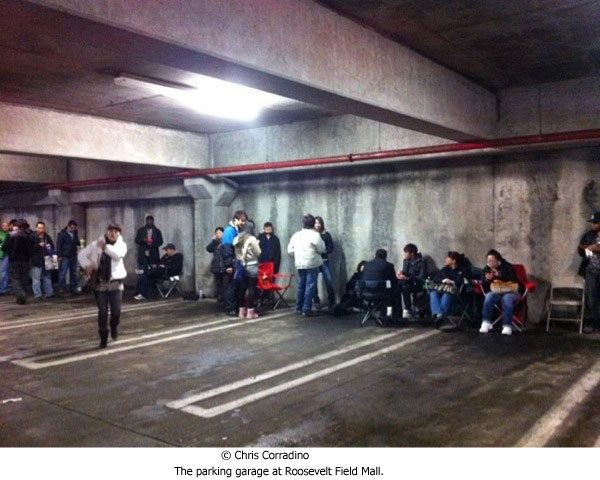 Nevertheless, as usually happens in these types of situations, people band together. We're all in this for the long haul with about seven hours to go, so let's make the best of it. Soon after, I met a whole party of nice folks from all different walks of life. There was the Assistant principal who was playing hookey. He just bought the first iPad a week before, so Apple told him he could exchange it for the new model. One nice guy was waiting on line for a friend who was at work. A husband and wife took the bus there along with their one-year-old son. In shifts of two, we grabbed lunch, used the facilities, and warmed up in the climate controlled environment of the mall. Around noon, Apple came down with a little snack cart and boxes of coffee. It helped warm me up as I glanced at the watch. Only 5 hours to go...

The news came and did their obligatory interview with the first folks who lined up around eight in the morning. When the cameraman turned on his light, anyone who called out sick from work, or school scattered like bees from a hive. The line was now several hundred deep, and my place — 26th in line — started to look very good. Eventually Apple had an employee with a megaphone announce the procedure. They would be handing out vouchers with the model number you wanted. Without the voucher, you would not be able to purchase one. 32 gb wifi in black, I said as he began to fish through the box of tickets.

It was 5pm, and the moment had arrived. Police and security escorted us up the stairs into the fresh air in organized groups of ten. The news cameras were rolling as curious bystanders looked on. One teenage girl scowled, "OMG, what is this, a tour bus?" We laughed as the procession continued past Macy's, the Sock Drawer, and B. Dalton books. Just ahead, there was the glowing apple, and thick crowds of excited people. Security started getting nervous and shouted "have your vouchers out and up". Grinning broadly I held up my voucher and was ushered through the chaos into the store. Just then, the entire team of Apple employees started to clap and cheer loudly. There store was packed with people ready to help. This was the experience that Apple wanted people to see. By 5:15 I headed home with a memorable tale to tell, and an iPad 2.

In the days to follow, I started downloading the apps, and I'll detail which ones in just a minute. First, I want to tell you about the actual iPad 2. If you've watched the news or read any reviews online, you already know the device is ridiculously thin, and light. It's also faster with the A5 processor making every transition instantaneous. As you might expect, the screen is beautiful, making reading, videos, and photos a pleasure. I didn't expect much from the cameras, but then again, I thought they would have been at least comparable with the iPhone 4's five megapixel cam. Unfortunately Apple put an old, grainy camera similar to the one in the iPod touch. Still, the-front facing camera is a great addition for Skype video calls.

The whole thing is housed in the outstanding Smart Case which was made specifically for the iPad 2. It's hard to believe that an accessory like a case could be worth talking about, but the design is actually quite ingenious. With a simple set of magnets the case slips into place perfectly and actually puts the iPad to sleep when attached. You peel it back, and the device wakes up. Despite the great functionality of the case, it's minimalistic in design, retaining the beauty of the actual device's form. Again, you likely knew all of that. But how does the iPad 2 help me become more productive? It's the apps. Here are some of the apps I downloaded for my photography business:

Filterstorm Pro — This is a preview of the future of mobile image editing. At only a fraction of the cost of Photoshop, this $10 app offers a sophisticated set of editing tools for the traveling photographer.

Here are some of the features I'm most excited about:

How will I use Filterstorm Pro?

Since my camera uses CF cards instead of SD, I had to pick up the $30 camera connector kitCF readers, but I'm not sure how reliable these are just yet.

When traveling, I download all of my cards into two Memory Kick Si units every night. I use two for the sake of redundancy. Once I know they've been safely copied to both devices, I usually format the cards and get ready for the next day's shoot.

With Filterstorm Pro, I'll add one more step to the workflow. Before formatting the cards, I'll selectively upload my favorites to the iPad. Using the larger display screen I can check for critical sharpness, and make any basic edits with the app. These processed images can instantly be shared on the Web or with a client on location.

It will not replace my current workflow which consists of Lightroom 2 and Photoshop CS5. First of all, it's not ergonomically comfortable to edit a ton of photos on a tablet. In addition, I believe editing will still be faster with a powerful processor like the one in my iMac. This is especially true when working with 60-100 MB TIFFS. Also, the app will not support 16 bit processing.

Having said that, it's clear that advanced editing is now possible on a lightweight mobile device. Moving forward, the laptop stays home while the iPad comes along for the journey. As you can see in the video below, Filterstorm Pro goes well beyond the basic photo editing apps you may have tried.

Some of the other features in Filterstorm Pro include:

Keynote — Like PowerPoint for the Mac, enabling you to create beautiful presentations.

Photographers Ephemeris — Using maps you can detail exactly which direction the sun and moon will be rising and setting.

CalenGoo — Consolidates all of my Google Calendars into one nifty app. It also allows you to work offline and sync later.

Squarespace — This is the company I use to host my website and blog. The app has the same functionality as what I could do if I logged on to my desktop computer. Review analytics, moderate comments, write and schedule a blog post, add a photo or video.

Friendly — the official Facebook app was designed for the iPhone and for some strange reason the company seems disinterested in creating one for the iPad. The developers over at Friendly saw the opportunity and created a nice app for $1.

Reeder — I follow several dozen RSS feeds but the Google Reader interface is really clunky. This app makes scanning and sharing article a pleasure. I was even able to customize it so an article pulled to the left is automatically sent to Instapaper.

Instapaper — My new favorite app for reading articles offline. The app strips out the ads, and gives you a clean, book-like page for you to focus on the written content. Once you add an article here, it is saved in the app's memory so you can read them even without Internet access.

Twitter — The bigger screen of the iPad makes this app a fun way to participate in the Twitterverse.

Weather HD — Helpful to plan outdoor shoots with beautiful visuals and accurate forecasting including details on precipitation, winds, and more.

After nearly two months with the iPad 2, it seems my iMac will be left in sleep mode more often than not. I'll likely only turn it on to work with my Lightroom catalog, or to process images with Photoshop. For just about everything else, the iPad will be my go to device. 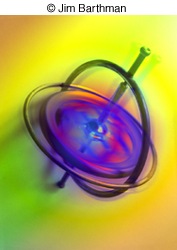 Would you like to know the secret to making the sharpest photographs possible? Remember it's a secret so don't spread it around. Okay, here it… 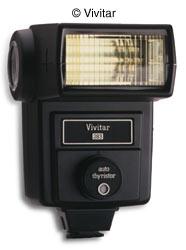 Off Camera Flash Made Easy

Of all the questions we get from students at NYIP, probably the most popular (after what camera, lens, etc. should I buy?) is how do I use my flash?… 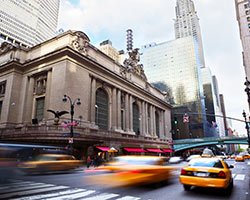 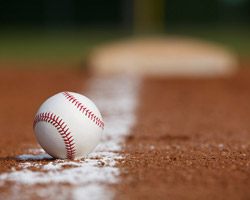